1A First Alternative is working hard on brand awareness. One campaign is focussed on sponsorship of team D2 of korfball association Oranje Zwart.


WESTMAAS – Korfball association Oranje Zwart has found a new sponsor for team D2 in 1A First Alternative. This ICT company from Delft has committed to being shirt sponsor for three years. Last Saturday the first home game was played in the new outfit.
In addition, the entire team was supplied with a new sportsbag. For this occasion the sponsor vehicle of SH-Webdev was allowed on the field. SH-Webdev is reseller of 1A First Alternative for the islands of the province Zuid-Holland.
The team members were very pleased with their new shirts and bags, but unfortunately that did not lead to the first home game being a victory. After a good first half, the game was lost 2-4.

The article at the Weekkrant – Het Kompas unfortunately isn’t available any more. 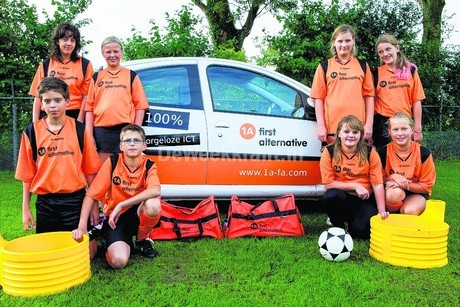