Our developers are busy with the preparations to support Active Directory on the 1A-server. As you have come to expect from us, you as a customer will not notice anything during your daily operations. To make the transition as smooth as possible, a number of components have to be revised first. The first noticeable change is the module “groups” in the Webmanager.

Previously, this module was split into two parts: configuration groups and groups. The configuration groups were intended for all 1A-specific functions. Some of these were not even real groups, but user settings that were also included here in order to be able to easily make bulk changes.

Since the function for bulk changes is used often by 1A-administrators, we have preserved these in a separate table “configuration of users”. All real groups which were previously listed under configuration groups have been moved to the list of regular groups.

It was already possible set quotas on the homedirs of users (if the feature was enabled by the 1A-partner). These could then be applied by 1A-administrators in the group module.

Quotas are still applied based on groups, but managing them is now done in a separate module (Webmanager → system → quota).

The method of operation has not changed. The following conditions are still valid: 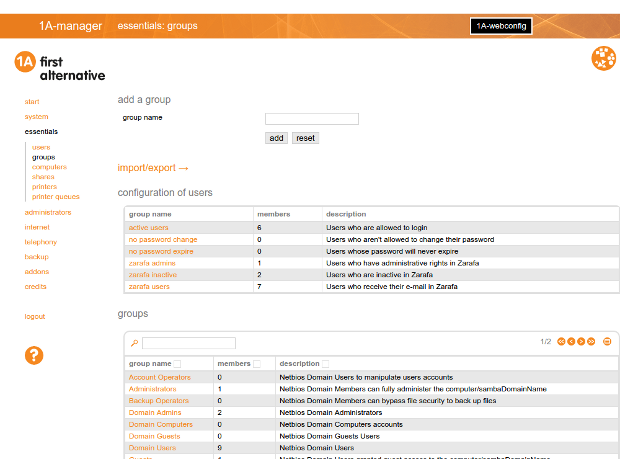