For 10 years we have distributed and supported Zarafa on the 1A-server. This year, Zarafa will be replaced with Kopano on all 1A-servers. Zarafa becomes Kopano.

Zarafa originated as an alternative to Microsoft Exchange. The major part of the software has always been open source. In the last years it has become increasingly difficult to continue to follow Microsoft. Not so much because of technological issues, but mostly to being able to maintain their vision. Microsoft has always been a proprietary business and now completely focuses on the cloud with Office 365. Zarafa has always attached great importance to ownership of and insight into your own data. Moreover, new technologies provide better integration possibilities.

In June 2016 a new start was made as Kopano, which is based on the Zarafa software. Kopano has a different approach: making the best software for sharing and communicating for everyone, regardless of the device being used.

Kopano is 100% open source software. This means that not only your own data is always accessible, but also the complete source code. This makes it virtually impossible for unwanted code to be introduced (like with the recent Yahoo scandal). Also, bugs in the software are discovered much quicker, because everybody can inspect the source code.

Kopano is compatible with all devices that either have a modern browser (among others Windows, MacOS and Linux) or which support ActiveSync (i.a.Outlook 2013 and higher, Android, iPhone and iPad). For Windows, MacOS and Linux, the three major operating systems, DeskApp is also available. This software provides the bridge between WebApp and the desktop.

For Outlook (2013 and later) there is also the Kopano Outlook Extension (KOE). This 100% compatible Outlook plugin handles all standard functionalities that are not available in Outlook, but are in WebApp. For example, the global address book, delegation, vacation messages, Out of Office Assistant for calendar appointments, and so on.

Replacing Zarafa with Kopano on the 1A-server will allow all our customers to fully benefit from the power of Kopano: the ability to share and communicate, always and everywhere. The changes for existing users of Zarafa will be minimal. All options that were available, will remain available.

While the ZarafaClient for Outlook still working for now, and also on Kopano, support has been discontinued for a while now. If you want to keep using Outlook, ask your 1A-partner what the best solution is for you.

Check out the demo of the WebApp here

Soon more articles will be published, where we will go more into details of the various components of Kopano. 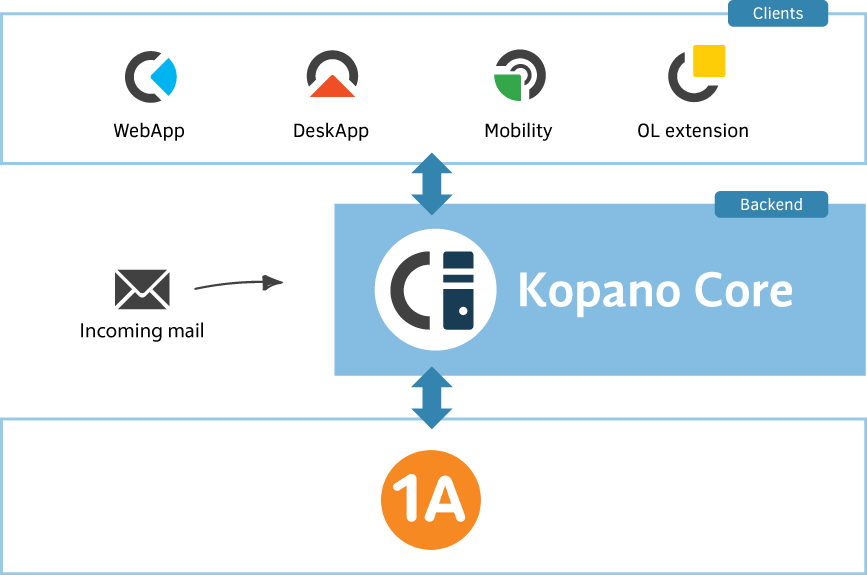